With drawings for the Startup Village expansion being finalized, we’re excited to introduce some of our new tenants. Markwin Velders is VP Operations at Kite Pharma EU. Startup Village will be temporarily facilitating 100 of their new employees until the end of 2019 in a brand-new pavilion, which is meant to be re-used later as a co-working and creation space by students and startups. Markwin talked to us about his career as a bio-scientist, business manager and consultant, and how launching the EU branch of Kite Pharma has been just like building a startup!

Based at one of the Science Park Matrix buildings, Kite Pharma EU is bursting out of its current office, which led the park’s management to call on Startup Village for additional resources. While it’s typically a place for early-stage startups, the temporary nature of their stay and the company’s drive to make a lasting impact on society with science-based technology, are what convinced us to provide the much-needed space in our new expansion, which couldn’t have come at a more convenient time!

In October 2017, the American biotech Kite Pharma Inc. was acquired by pharma company Gilead Sciences and things have been moving fast since then. Velders says that laying the ground for European operations and facilities has been challenging but exciting. In 2019, all the offices and production will be moved to a new factory in Hoofddorp, except for the research department. But until then, the new Kite employees will settle at Startup Village for one year until the new building is finished. Velders: “In January we employed 15 people, now we have around 50 and by the end of the year it will be 100.”

Only a few months ago Velders was arranging the whole European transition by himself as managing director of Kite Pharma EU. “We are currently developing the culture within Kite Europe. I want to improve connections within the company, because they are limited at the moment. We want to offer a space where our employees can meet and share knowledge. That’s why we are excited to use Startup Village as our temporary location from which we can build and grow the European branch.”

From science to startups

Markwin Velders is no stranger to the startup lifestyle. After extensive experience as a PhD at Leiden University Medical Center and later as a Postdoc at Loyola University in Chicago in the field of Molecular Immunology and immunotherapy of cancer, Velders decided to shift his focus to the business side of the field; starting, failing and starting-through on a few companies. He later held managing positions at companies like AM-Pharma and TNO. In early 2011 Velders started offering his services to technology startups in the field of life sciences and that’s how he got introduced to two researchers at the Dutch Cancer Institute (NKI) working on a project that was directly linked to his own research from his early days as a scientist.

As a student in 1990 Velders joined a small research group in Israel who where then just working on a break-through discovery, the Chimeric T-Cell receptor (or Car-T), making it possible for immune cells in the body to be reprogrammed and render tumor cells harmless. He later used this experience for his promotion research on T-Cell immunology technology. Ton Schumacher and Carsten Linnemann, the two researchers at NKI, were open to the idea of commercializing their research, to make the solution more readily available to the market.

“I insisted they would start a company and that is how T-Cell Factory was born. I started as a business consultant in 2014 and the next year we got in touch with Kite Pharma Inc. where scientists originating from UCLA were working on complementary technology, making it a perfect fit with T-Cell Factory.” The successful developments at Kite sparked the interest of Gilead Sciences, leading to the acquirement of Kite Pharma last year.

“It all draws back to science”, says Velders, “a solid scientific foundation is key to any successful tech or science-based startup. The research of the founders has been published in several ‘Nature’ papers, which has improved our international exposure. It’s also something investors will look at, they are more willing to invest if there’s proof that a new discovery has a legitimate scientific base.” Velders’ role in recent years has been primarily that of a translator, “When I hear scientists talk about their work, I always think about ways in which it could be translated to business. It’s all about applicability, essentially there needs to be a potential product”.

Velders’ #1 tip for aspiring entrepreneurs? Get people with experience on board! People who will think ahead 5 or even 10 years along the line, and who can step in as a coach. The combination of business experience with fresh talent and key opinion leaders is what makes a great startup grow into a successful company and what makes it easier to eventually create an exit.

Kite’s coming to Startup Village is bound to create some meaningful connections within the startup community, and their aim to create social impact through improving cancer therapies fits perfectly with the intentions with which Startup Village was build; to empower innovators to create and grow impactful companies. Check the website for more information about Kite Pharma.

Want to know more about the expansion of Startup Village or become a partner? Please contact Suzanne Hansen at suzanne@ace-incubator.nl.

ACE News: VU PhDs dive into the world of entrepreneurship 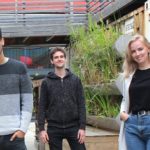